New research presented at the American Diabetes Association (ADA) 80th Scientific Sessions last month revealed some startling potential consequences of hyperglycemia on brain function. Scientists from the University of California, Los Angeles, applied brain imaging and specialized analysis techniques to discern differences in the brain structure of patients with type 2 diabetes at different levels of HbA1c, along with nondiabetic control subjects. The work was funded by the National Institutes of Health/ National Institute of Nursing Research.

A total of 49 patients with type 2 diabetes were enrolled in the study (12 controls, 22 with A1c>7%, and 15 with A1c<7%). The demographic information is summarized below. 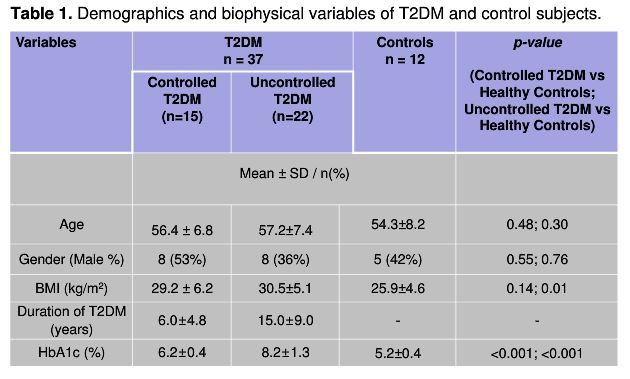 For all subjects, magnetic resonance imaging (MRI) was used to gather images of the brain, and the “whole-brain mean diffusivity (MD)”, a measure related to certain brain functions, was assessed and compared between the three groups.

The main outcome of the study was as follows: 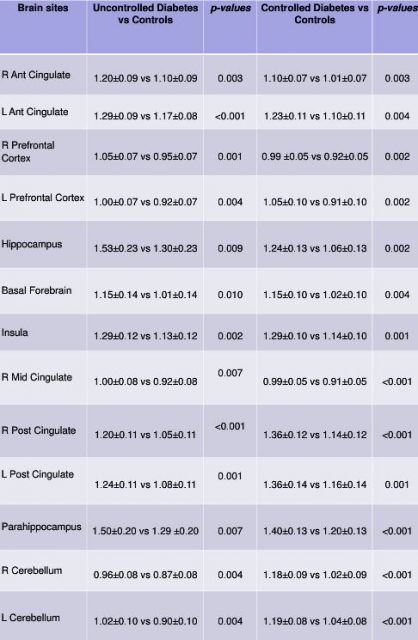 The study authors went on to explain that the brain regions that showed significant tissue damage are known to involve various aspects of cognition, including mood.

The main implications of this study are as follows:

Furthermore, the study authors noted that the brain injury incurred due to hyperglycemia may further hinder the patients’ ability to manage their blood glucose levels effectively. In the clinical implications discussed in their poster, the researchers concluded,

“Poor glycemic control is associated with increased brain injury. Brain injury is located in regions which can impair diabetes self-care. Patient education which require these brain regions may not be effective. If confirmed, brain protection should be considered as a benefit of good glycemic control in clinical discussions with T2DM patients”

While this work provides important insights into how persistent hyperglycemia may negatively affect cognitive function, it will need to be further validated through additional research. Also, as this study was performed on a cohort of patients with type 2 diabetes only, it is not clear at this time whether these findings may be relevant for those with type 1 diabetes, although it is logical to postulate that glycemia is the primary determining factor in these findings.