The FDA cleared Tandem’s automated insulin delivery (AID) system, Control-IQ, for children ages 6-13, last week in the US. This system is designed to increase time in range for users and it does – see below for the data!

To date, the only other hybrid closed loop system available for children is Medtronic’s MiniMed 670G, which is approved for children seven years and older. Control-IQ is the first system with automatic correction boluses and no fingerstick calibration (thanks to the Dexcom G6 sensor that it uses).

Control-IQ launched in January of this year for people 14 years and older. Since then, more than 40,000 t:slim X2 pump users have upgraded their pump software to Control-IQ. We saw very positive real-world data presented at ADA this year – in the first 30 days using Control-IQ, users’ time in range increased by 2.4 hours per day, and individuals were in active closed loop 96% of the time.

At the ATTD conference in February, the trial for Control-IQ in children presented strong results. Results from that trial were used to get this week’s FDA clearance. In that trial, we learned that:

Control-IQ still should not be used in children under the age of six, in people who require less than ten units of insulin per day, and in children who weigh less than 55 pounds.

For more information on the system, check out Kerri Sparling’s Test Drive of Control-IQ where her time in range improvement was quite impressive! You can also Katie Bacon’s piece on one family’s takeaways (her own!) from the first month of their teenage daughter using Control-IQ.

After a month of her daughter using Control-IQ, Katie Bacon reviews the pros and cons of the algorithm and shares her family’s tips and takeaways

When the email came through in early April that our daughter, Bisi, could now download the software to run Control-IQ on her t:slim insulin pump, the timing seemed perfect. After all, our family was staying at home due to COVID-19, so we had plenty of time together to do the training and figure out the new system and how it worked for Bisi and her blood glucose levels. Plus, from everything I’d read about COVID, keeping blood sugars as stable as possible was more important than ever, and it seemed like Control-IQ could help us with that. (The Control-IQ algorithm uses data from Dexcom’s CGM to lower insulin delivery when a low is predicted and to increase insulin when a high is predicted – learn more about Control-IQ here.)

Bisi has now been on the new system for about a month, and while it hasn’t been a magic bullet and we’re still learning, Control-IQ has improved Bisi’s time in range by about 5% (and we’re hopeful that her time in range will continue to improve). Also, even more importantly, it’s improved her quality of life – and ours, as the parents who watch out for her. When I sat down with Bisi recently to ask her about the change, I got her perspective on the burden she feels diabetes has placed on her ­– and the power of Control-IQ to lighten that load. She told me that before using Control-IQ, at any given time 30-40% of her focus was on diabetes. I was taken aback by this percentage, since Mark (my husband) and I have always tried to take some of the weight for her. As she told me, “It feels demanding, like a lot of pressure, as if someone’s poking my head.” But with Control-IQ, she says, she doesn’t need to worry about much except bolusing insulin at mealtime. She has fewer highs, fewer lows, and she says she feels better physically than she did before. “For as long as I can remember, diabetes has been a main focus of my life, but it really shouldn’t be that way. So it’s been nice not to focus on it as much,” she said.

In terms of what Bisi has experienced over the past few weeks since switching to Control-IQ, I’ve divided my thoughts into the pros and cons of the system as we’ve experienced it; I’ve also included tips drawn from what we’ve learned from Bisi’s endocrinologist and DCES.

Thoughts and Tips for using Control-IQ:

Even though we still feel like we have more work to do in terms of getting the best out of the new algorithm, Control-IQ has improved Bisi’s life in important ways. As Bisi’s endocrinologist told us, “It’s not perfect, and you need to think more about active insulin than you did before. But the goal with this is to have diabetes interrupt your life less than it did before.” For Bisi, the important aim of staying in range now requires less mental effort. As she said recently when looking at her CGM graph after 24 hours of Control-IQ: “This is pure gold.”

This article is part of a series on time in range made possible by support from the Time in Range Coalition. The diaTribe Foundation retains strict editorial independence for all content.

Katie Bacon is a writer and editor based in Boston. Her daughter, Bisi, was diagnosed with type 1 diabetes in August, 2012, when she was six. Katie’s writing about diabetes has appeared on TheAtlantic.com and ASweetLife. Katie has also written for The New York Times, The Boston Globe, and other publications.

Technology continues to make managing our diabetes easier. Continuous glucose monitors, apps for carb counting and insulin pumps have all alleviated some of the stress of managing our condition. Tandem Diabetes created Basal IQ technology, which allows us to spend less time worrying about going low and let our devices do the work. For a person living with diabetes, this means less stress and more sleep.

Basal IQ technology helps reduce the frequency and duration of lows by predicting glucose levels and suspending insulin if the blood sugar level is thought to go below 80 mg/dL or the Dexcom reading goes below 70 mg/dL. Insulin delivery will start automatically once the blood glucose starts to rise again.

Basal IQ is different than the newly released Control IQ, in that Control IQ can adjust insulin delivery, including the delivery of automatic correction boluses as needed, therefore helping patients avoid episodes of hyperglycemia. Using either one of these systems also means fewer fingerpricks, as you will no longer have to get manually take your blood glucose reading.

Basal IQ technology has given many people living with diabetes, and those who love them, a little more rest and some peace of mind. A pivotal study showed the use of Basal-IQ Technology on the t:slim X2 Insulin Pump demonstrated a 31% relative reduction in time spent below 70 mg/dL when compared with a CGM-enabled pump without Basal-IQ Technology. Important to note, the less amount of time spent at lower glucose levels did not mean more time spent at higher glucose levels. Maintaining your target range has become a lot easier thanks to Basal IQ technology. 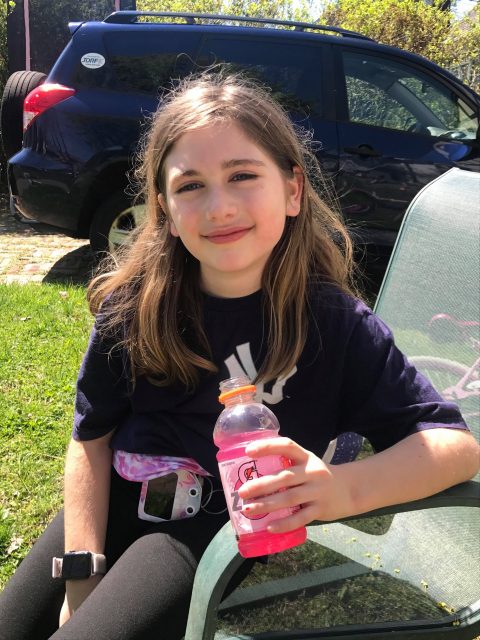 One woman, Allison Hoffman, who helps manage her 10-year-old daughter, Becca’s diabetes, raved about the changes to her overall well-being since switching over to Basal IQ technology after relying on Omnipod for the past few years.

Here is her story:

For 7 years my mornings were absolute hell. While I would see others sleeping in, meditating, going to the gym, etc, I was a slave to Becca’s whackadoodle blood sugar swings, which would often start around 5:00 AM. My body learned to wake up at this time, and that I doubt I’ll ever be able to change.

My mornings would include me running up and down the stairs entering the bedroom, praying I wouldn’t wake her and deny her the right to sleep in, suspending insulin (audible beep I couldn’t silence), sticking glucose tabs in her mouth, often with the pay-off of a horrible blood sugar spike. I would start 95% of my days this way.

And the frustration! No adjustments to her settings were right. If I reduced her insulin she’d go high; .35 too low, .4 too high. I would wake up at 3:00 am to set a temp basal to get the amount she needed that Omnipod didn’t have as a preset-still wouldn’t work. Nothing I did was right.

Since starting on t:slim pump with basal IQ, I finally have my mornings back. It allows more fine-tuned insulin delivery and suspends when it predicts her to go low. As long as her sensor is good, and her insulin settings aren’t way off (I will always need to determine her insulin needs, it isn’t automatic), I can have a pretty peaceful morning now.

I can watch the news, or another show, or read, and my coffee doesn’t go cold. I can sit with my dog on my lap and not have to jump up every ten minutes to go deal with diabetes. I can breathe. And Becca can sleep peacefully.

I’ve made four seesaw activities for my students this morning and she’s still sleeping.

7 years of hell. I finally have my mornings back.

If you are living with type 1 diabetes and are considering a pump, you may want to look into t:slim X2 pump along with the Dexcom G6 so you can make use of the new Basal IQ or Control IQ technology. Their slogan is “live more and worry less” and I am so glad this seems to be the case for so many.

Have you tried out this technology? How has your experience been?