You’ve probably heard of the five love languages before. They are based on Dr. Gary Chapman’s 1992 seminal book, “The Five Love Languages: How to Express Heartfelt Commitment to Your Mate.” The book outlines five of the best ways people can effectively communicate and bond with their mates for better relationships.

Chapman argues that all five love languages are enjoyed by all people to at least some degree, but every person has a primary love language and a secondary love language, that they feel the most loved when spoken to and communicated with in that way. People who read his book and take the profile test at the end can figure out their love language, but most people know theirs intuitively.

Dr. Chapman is a world-renowned speaker, preacher and author whose works have touched millions of lives, and while living in quarantine it’s more important than ever to communicate effectively (and not want to kill) your spouse. So, what are the five love languages, and how do you speak your partner’s love language in quarantine? Read our suggestions, below! 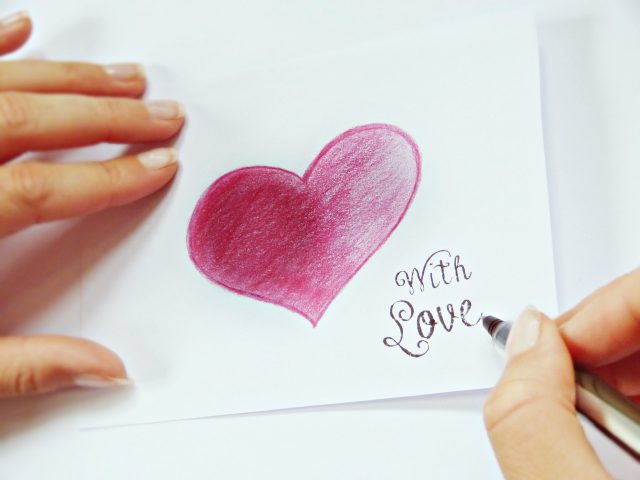 People who speak the love language of receiving gifts aren’t selfish, they love to both receive and give gifts. This need not be fancy or expensive gifts, but thoughtful intentions from the heart count the most. Some ideas to speak their love language during quarantine include:

If your spouse’s love language is physical touch, they feel most connected to you when you’re cuddling, snuggling, and generally in close proximity, especially but not limited to sharing moments of physical intimacy. Some ways to speak their love language include:

These pandemic times can be especially tough, but learning to speak your partner’s love language can make all the difference between growing and thriving as a couple during this time, and seriously getting on each other’s nerves. Have you found ways to better connect with your partner during this time? What strategies have worked for you as a couple? Share this post and share your stories below; we love to hear from our readers!

“What if you got ill, what would you do then? Who would you call? How would you get home? Why don’t you start with a smaller trip?”

While my counselor posed reasonable questions, my answers convinced me, after twelve years of self-doubt and physical struggle that no, my identity was not “Type 1 Diabetic” or “Thirty-Two Year Old, Unmarried Woman.” Instead it was introspective adventurer, writer, childcare provider, and admirer of all things beautiful.

So that Friday, I compiled well-marked maps and packed my bags for the next five days. They overflowed with insulin pens, needle tops, cliff bars, glucagon pens, bags of Swedish Fish, bottled water, continuous glucose meters, glucose gel, old fashioned glucose meters, test strips, a hiking bag… As most traveling type 1s know, the list is far too long to enumerate. But I woke up in the spring of 2019 with the desire not just to survive and be helpful to others, but to head south and climb a great height. My destination: the Blue Ridge Mountains. This was no impulse. No, this was a conviction.

My palms were sweating as I set out on the scenic route, taking back roads in lieu of the more efficient highways. As with any good trip, nothing went quite as planned. For one thing, I got lost on my second day in Virginia, and my phone picked up no bars. But as soon as I found my way to a safe trail, I felt at home among the bugs and canopies of trees. Truthfully, I felt much less alone, in solitude and cloaked in Shenandoah National Park’s shades of blue, than I did among most people. 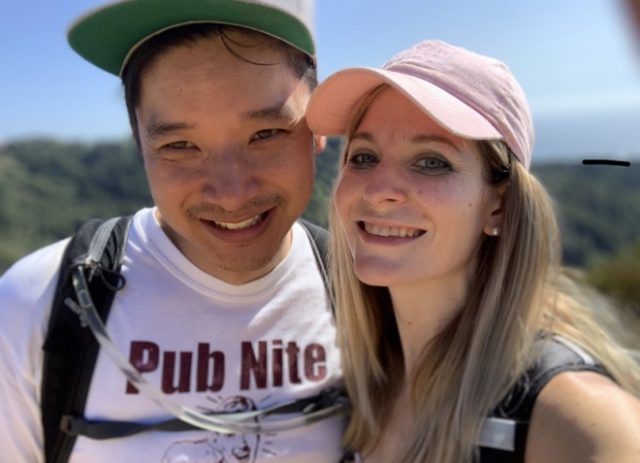 After meandering through and taking many breaks to eat the glucose and lunch I had packed, I found my way back to the main road. I stopped at each overlook to spread my arms and become a part of the staggering landscape. When I arrived back home, something small but essential shifted inside of me. I felt different, lighter, and more confident. I began to take my bike on longer, solo trips through the park. And I began to entertain the idea that my next trip would be far better with a companion. But I hesitated because my romantic relationships over the past decade had been fraught with oversharing or hiding how much I struggled with type 1 diabetes (T1D).

Things changed on a rainy spring evening. I decided to meet Roy mostly because he seemed like he knew something I didn’t, smiling and sipping out of a coconut in the photo in his dating profile. On the phone, we both liked to think and laugh in equal amounts and we loved the same Indie band and the same eccentric meditation guru. When I stepped through the door of the bar, I caught sight of him before he saw me. His dark hair fell to one side of his thoughtful face and unlike most people sitting on their own, he wasn’t scrolling through his phone but looking at the world around him. We hit it off, and in typical fashion, I didn’t trust it one bit.

For one thing, he seemed like an impossible burger of a person! He was completing a fellowship in Cardiology and had very little ego. He worked long hours caring for patients in heart failure but rarely became exasperated. He played music, could write like a boss, and genuinely appreciated my varied pursuits of art and childcare. He was honest without being hurtful. I didn’t trust how beautiful this could become and so by the end of the first month of dating, I compiled mental notes of any small signs that he couldn’t “handle” my diabetes. It was a difficult task because he never once judged how I managed my numbers. Instead, he wondered aloud how I functioned on so little sleep.

By that August, he acknowledged that type 1 diabetes was nowhere nearly as straightforward to manage as he had previously thought. But he remained undeterred, and we took a week-long trip to the west coast, traveling between San Francisco and Monterey, stopping in solitude and solidarity to watch the Pacific roll in between coves and cliffs along Big Sur. He often said, “I don’t think of you as a sick person, you know…” and this assertion aligned with my own stubborn belief that in spite of the relentless nature of type 1, I could do so much with my life. As it turned out, I woke each day before he did, more than ready to take on Highway 101 and hike the heights of Pfieffer State Park, the trip I had always dreamed of making.

As type 1s, most of us wax grateful for strangers who help when we are having a low sugar in a public place. But in a relationship, what counts is not the fact that someone brings you juice. It’s that they do it, as Roy still does, at five in the morning three days in a row without any outward irritation. And that they genuinely believe you can do most things for yourself. They treat you as strong as you actually are inside but understand when you are worn down and could use a hand. Looking back, the first month together was a mountain of growing pains for me, of learning that, yes, this person has existed in the world this whole time and even if my pancreas is defunct, I am not. This love has been both as attainable and as rare as climbing the side of the Blue Ridge mountains with insulin on ice in my backpack before heading home – the journey never easy but always good.

This content originally appeared on Integrated Diabetes Services. Republished with permission.We all know relationships are hard. We all know that living with diabetes is hard. So being in a relationship with someone with diabetes can be a special challenge! Back in the 90s, Gary Chapman wrote a pretty great book on relationships and communication called […]
Source: diabetesdaily.com