Updates and delays from Abbott, Dexcom, Medtronic, and Senseonics

With several clinical trials on hold due to the COVID-19 pandemic, we’re bringing you a roundup of the latest updates on future continuous glucose monitors (CGM). Understandably, the FDA also announced a few months ago that it would focus its efforts on devices related to COVID-19. With the disclaimer that it’s impossible to know exactly when the pandemic will subside, when trials might resume, and how FDA reviews might be affected, here is the latest news we’ve heard from companies.

Click to jump to a product, which are organized alphabetically.

What’s new? FreeStyle Libre 2 keeps the same “scanning” feature as the original FreeStyle Libre, but adds Bluetooth connectivity. This is important because it enables optional high and low glucose alerts. Users who enable these alerts will be able to get a notification on their reader or phone whenever their glucose reading goes above or below their specified ranges. Looking ahead, the Bluetooth feature will also allow FreeStyle Libre 2 to be part of automated insulin delivery systems (AID), like Insulet’s Omnipod Horizon.

When’s it coming? The FreeStyle Libre 2 has already launched in a few European countries (we know of Germany and Norway) and will launch in others soon. In the US, FreeStyle Libre 2 has been under FDA review for over a year. In March, Abbott said that it was working through “some finishing items” and was “very confident” the device would be cleared soon. 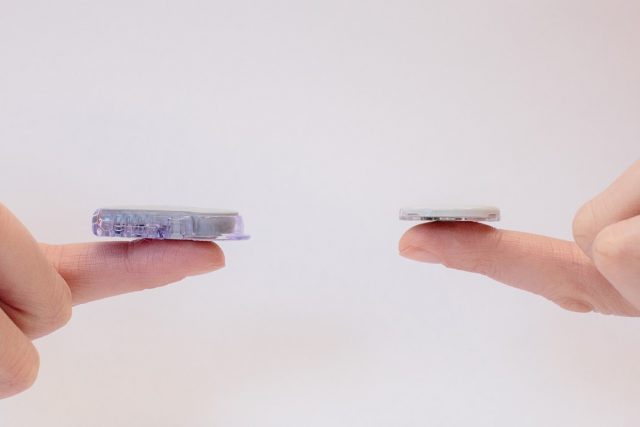 What’s new? Dexcom’s G7 will be fully disposable (the transmitter and sensor are combined and thrown away together) and have longer wear (we believe somewhere around 14-16 days). Remember that the Dexcom G6 sensor lasts for 10 days but has a transmitter that is re-used for 90 days. The G7 will be considerably slimmer than G6 and will have a lower cost of manufacturing in bulk, though consumer pricing is not yet determined – we imagine it will be similar. The G7 will keep the same accuracy, no fingerstick calibrations, and Bluetooth connectivity as the G6.

Dexcom has been developing G7 in partnership with Verily, the division of Alphabet formerly known as Google Life Sciences. There has been mention from Verily that an accelerometer may also be built-in to the G7 device, but we aren’t sure if that feature made it into the final version of G7. Having a built-in accelerometer could allow the G7 to also track physical activity, like a Fitbit or other fitness tracker.

When’s it coming? Dexcom planned on launching G7 in “early 2021,” but with most clinics placing new trials on hold, Dexcom is expecting a “minimum delay of approximately six months.” It’s difficult to know when clinics will be able to conduct trials (and when people will feel comfortable enrolling in trials), but assuming a six-month delay, G7 could be on the US market sometime in the second half of 2021.

What’s new? Medtronic’s next CGM, referred to as “Project Zeus,” will reduce the number of required fingerstick calibrations and have improved accuracy (compared to its current offering, Guardian Sensor 3). The new CGM will require day-one calibration (unclear on the number of fingersticks that will be required on day one), compared to Guardian Sensor 3, which requires at least two fingerstick calibrations every day. Medtronic expects Project Zeus to launch with a “non-adjunctive” indication, meaning users will be able to bolus insulin based on CGM reading alone, and not have to perform a confirmatory fingerstick. the new CGM will keep the same seven-day wear, size and shape, and reusable transmitter component as the Guardian Sensor 3 (pictured above).

When’s it coming? The trial for Project Zeus began in June 2019 and is expected to wrap up within the next month. Medtronic expects to submit the CGM to the FDA by the “end of the summer.” 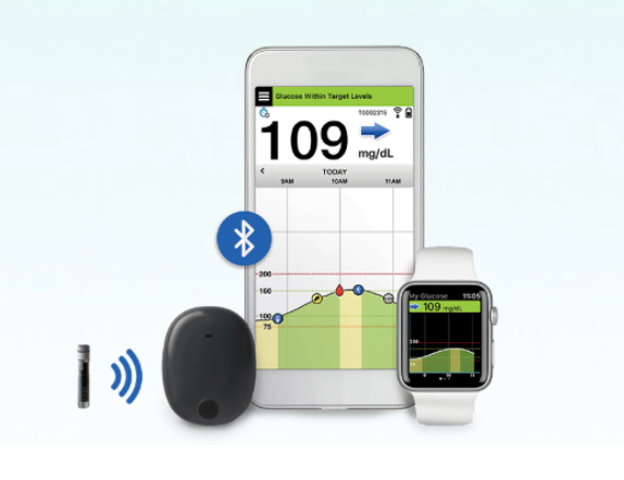 What’s new? The “XL” extended life-version of Senseonics’ Eversense in the U.S. will have the same size and features as the original Eversense, but the Eversense XL is implanted for 180 days, rather than the 90-day Eversense. As a reminder, the Eversense sensor is implanted in the users’ upper arm in a clinic and remains there for the sensor duration; a silver-dollar sized on-body transmitter is worn on the outside of the arm to deliver readings to a smartphone. Senseonics is targeting reducing calibrations from 2 per day to 1 per day with same non-adjunctive indication.

When’s it coming? Eversense XL is already available in Senseonics’ European markets. The trial for Eversense XL in the US wrapped up in late March, and Senseonics has previously aimed for FDA clearance in “late” 2020. We aren’t sure whether that timeline has been pushed back due to COVID-19, but the fact that the trial has already completed is encouraging.

Within just a few days, the world as we know it has changed. We are all now understanding the reality of this disease, COVID-19,  and are being forced to social distance and stay home whenever possible. Some of us have taken work to our living rooms, homeschooling our children, making 3 meals a day for an entire family, all while trying not to panic that either you or your loved one falls under the high-risk category.

We mustn’t forget about self-care. It is important for us to be in a good place mentally, emotionally and physically for ourselves and anyone else who may need us. It is also proven that staying active boosts our immune system, which we all need more than ever.

With so many workouts available online, there is no shortage of things to do from your own home or yard. Depending on what you like, here is a variety of ways to stay active while being stuck at home.

Back to the Basics

Calisthenics is probably the most underrated form of exercise. And it is great to do at home since no equipment is required. Also, anything cardio-related will strengthen your heart and your immune system! Try to do a routine of a certain amount of rounds and repetitions of moves like burpees, sit-ups, push-ups, lunges, squats. One of my favorite free apps for calisthenics is Madbarz. This will be sure to get your heart pumping and leave you feeling energized!

It is really wonderful how people are coming together during this time. Many gyms, fitness companies, and coaches are providing their clients and the public with free workouts. Here are a few to check out and this is a great time to try something new!

Oftentimes, people think exercise has to be at a gym or running in a park but that is not the case! Doing a good thorough cleaning of your house (which we could all use right now), doing loads of laundry or cleaning out your closet is sure to burn some calories! Track your steps and calories burned on a device like Fitbit.

If you have children who enjoy Tik Tok, Just Dance, and other interactive dance games and apps, this is the time to get onboard! You can bond with your children while getting in a sweat.

No matter what you do to stay active, it is vital for both our bodies and minds. Getting fresh air, vitamin D and keeping our bodies moving is key not only for our physical but our mental health as well. The fact that it boosts our immune systems, too, is a great perk!

What will you do to stay active during these uncertain times? Share and comment below,  let’s all help each other!

Working out in the middle of winter is hard. There’s no escaping that. Remember all of those eager new year’s resolutions, amped up motivation, and sense of determination that you had at the beginning of the year to get and stay fit? Well, research shows that only 8% of people keep their resolutions all year, […]
Source: diabetesdaily.com

If you share with someone results from a study indicating that even “healthy” people often eat foods that cause harmful blood sugar spikes, they may believe you and understand the underlying reasons. However, they may be much more likely to act on this knowledge if they wear a device that shows them in real time […]
Source: diabetesdaily.com