For the millions of people living with type 1 diabetes worldwide, the development of an effective system to automatically regulate blood sugar levels is of paramount significance. Artificial pancreas systems (APS) are being developed with the goals of automatically adjusting the delivery of insulin (and potentially, glucagon) based on glucose readings from a continuous glucose monitor (CGM), taking a lot of burden off patients, improving glycemic management, and enhancing safety.

What is the best way to approach the design of an artificial pancreas system? What are the pros and cons of including glucagon in the system alongside insulin?

Dr. Roman Hovorka, PhD, FMedSci from the University of Cambridge, argued against the inclusion of glucagon in the system, while Dr. Steven J. Russell, MD, PhD from the Massachusetts General Hospital, presented his case to support the use of a dual-hormone system. Both speakers disclosed several relationships with diabetes technology companies (including those working to develop APS).

Here is the summary of this interesting debate.

The Case for Single Hormone

Dr. Roman Hovorka highlighted some research outcomes of artificial pancreas systems that utilize insulin alone.  He presented data from several studies showing that these devices “improve time in target and time below target” as well as reduce A1c. However, the time in target range was only increased by ~11%, and the A1c improvements were modest, with the average A1c still above the ADA recommendations.

Dr. Hovorka explained that the vast majority of companies are currently moving forward with single-hormone systems. He also focused on a system developed by Cambridge that he’s very familiar with, showing data where ~95% time-in-range (TIR) was achieved. Notably, he remarked that a low-carb diet was also an important factor in this success case. Overall, however, only 7% of users were shown to achieve a time-in-range metric of >90%, although 28% achieved a TIR of >80%, 69% achieved a TRI >70%, and 86% achieved a TIR of >60%.

The presenter noted that one of the main issues currently hindering the efficacy of the APS is the delayed insulin absorption and action after subcutaneous insulin delivery. Adding glucagon into the system will not fix the issue, he noted, as “dual hormone delivery DOES NOT accelerate insulin absorption.”

While he acknowledged that glucagon could be useful in reducing low blood sugar risk in such systems, he also highlighted the complexity and high cost of such a system as barriers. In addition, he noted that the use of two separate cannulas could be burdensome, and for children, in particular. He also noted that the chronic delivery of glucagon subcutaneously requires more research to identify any risks.

In comparing the outcomes between single-hormone vs. dual-hormone systems, Dr. Hovorka noted that there was a slight increase in the TIR for the dual system (~78% vs. 71% in the longest studies), and the mean glucose (156 mg/dL vs. 140 mg/dL) was lower for those using the dual system. He also presented data to indicate that daytime hypoglycemia (in particular during exercise) could be reduced using a glucagon-insulin system, while a single insulin system was enough to eliminate hypoglycemia overnight. Furthermore, “comparative benefits of the single- and dual-hormone systems for improving HbA1c and preventing severe hypoglycemia remain unknown,” he underscored.

The Case for Dual Hormone

Dr. Steven Russell noted first that he believes “insulin-only hybrid artificial pancreas systems are the state-of-the-art in diabetes care” and that he is involved with projects that utilize both single- and dual-hormone approaches. Next, he went on to explain why he thinks a dual-hormone system would be more appropriate.

After pointing out that there are actually two hormones that are missing in type 1 diabetes – insulin AND glucagon, he suggested that in addition to further preventing hypoglycemia, a dual-hormone system can also help achieve lower average glucose and higher TIR than an insulin-only system. He presented several studies to support this point, including recent data from his project. 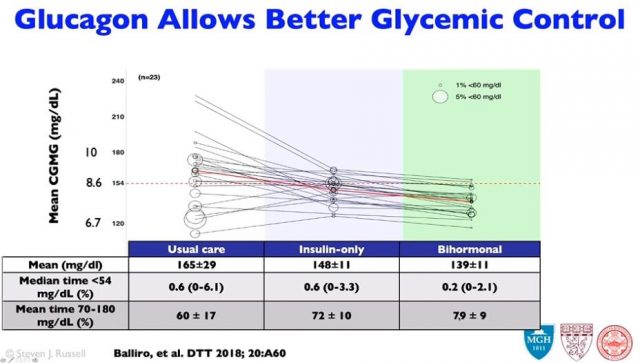 Importantly, Dr. Russell pointed out that by using micro-doses of glucagon to prevent or treat hypoglycemia could “oppose weight gain or encourage loss”. This is because using glucagon instead of carbohydrates to prevent or treat low blood glucose “promotes satiety and increases energy expenditure”.

While the speaker acknowledged the challenges associated with developing a dual-hormone system, he also noted that recent work has been bringing us closer to achieving this feat effectively. For instance, a number of stable glucagon formulations are now available (although not yet FDA approved for use in such a system). The safety studies that have been conducted have been reassuring.

Moreover, Dr. Russell addressed a common concern of glycogen store depletion, citing a 2015 study that indicated “no significant decrement in liver glycogen after repeated glucagon doses”. Importantly, he also presented some research showing that “users prefer the bi-hormonal system”, especially among those who aim for lower targets. 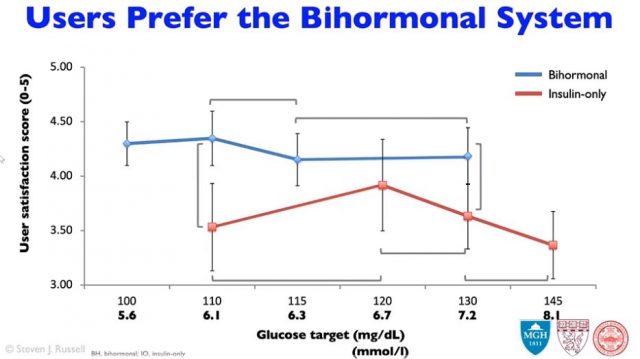 When addressing the potential increase in cost for a dual-hormone system, Dr. Russell had this to say:

“[The] significant increase in beneficial outcomes will justify the increase in cost… The difference in having no automation to single-hormone artificial pancreas is the same increment as you get going from a single-hormone artificial pancreas to dual-hormone… If one can justify adding automation, one could justify some additional expense to add the cost of the glucagon…”

Numerous artificial pancreas systems are currently being developed, with the vast majority opting for the insulin-only version. No doubt, the specific algorithms and insulin types used also play a paramount role in their efficacy and patient satisfaction. The use of glucagon remains a point of contention.

What are your thoughts on the subject?

Becoming sick when you have type 1 diabetes can easily complicate things. When you have the flu or a serious bacterial infection, your blood sugar levels can quickly become harder to manage, as they typically trend higher because of your body’s automatic, hormonal response to being sick. Because of this, you might find yourself needing more insulin than usual and needing to check for ketones more often to prevent diabetic ketoacidosis (DKA). Having a plan for sick day management when you have type 1 diabetes is crucial.

It’s important to be mindful of the possibility of high blood sugar when you’re sick. But it is also important to realize that sick day lows are a definite possibility as well! Especially if you’re taking more insulin than normal to combat highs when sick, you have to be mindful of resulting lows. You also run the risk of encountering a severe low if you are either unable to keep food down or lack an appetite when you’re sick, which are common realities when you have a cold or flu.

Whatever the reason for a low, keeping glucagon handy to combat severe bouts of hypoglycemia on a sick day is definitely a must. Severe hypoglycemia is a dangerous complication of type 1 that can result in seizure, loss of consciousness, or death, and there is peace of mind in having a safety net to prevent any one of those outcomes. Glucagon is the first line treatment for severe hypoglycemia because it is the main counter-regulatory hormone to insulin. Parents and caretakers of those with type 1 can especially benefit by having an immediate safeguard against the dangers realities of a severe low.

The standard of care has been to keep a glucagon emergency kit handy. Historically, these emergency kits came equipped with an injectable form of glucagon, that requires mixing powder and liquid with a syringe by whoever is administering the shot. While this can definitely be an effective form of glucagon, having to mix the shot prior has made the procedure complicated and intimidating for some.

Luckily for those of us affected by type 1 diabetes (T1D), glucagon has been approved in two new forms over the last year: nasal glucagon and pre-mixed steady state.

Baqsimi is the first and only nasal, non-injectable form of glucagon, offering a slight variation on what most people with diabetes are used to. It is administered like a nasal spray, but does not require inhalation, so even if a patient is unconscious (a frequent cause of severe hypoglycemia), anyone can administer Baqsimi and it will work.

Gvoke is the first liquid stable form of glucagon, meaning though it is an injection, it comes ready to use and requires no mixing on the part of whoever is administering the shot. Gvoke also comes in two forms: a pre-filled syringe (called Gvoke PFS) that is available to patients now and an auto-injector pen (the Gvoke HypoPen) that has yet to become officially available.

Neither Gvoke nor Baqsimi require refrigeration, and both have an impressive shelf life of up to two years if kept at room temperature. Another added benefit of these next generation iterations of glucagon is that these tools can likely prevent an ambulance trip to the hospital, saving time and resources. (Editor’s Note: This is especially important during the current COVID-19 pandemic, as it is not advised to visit hospitals unless absolutely necessary.)

How to Get Glucagon

Lilly currently offers a Baqsimi coupon patients can use to get up to two devices for as little as $25.

Through the end of April 2020, Xeris is offering a Gvoke co-pay card with which some patients can pay as little as $0 with eligible insurance to get their Gvoke PFS. Patients can also opt to request their prescription through the website and have Gvoke PFS delivered by PillPack at no additional cost.

Keeping glucagon handy is the best defense against unexpected lows when you’re not feeling well. Being sick might come with some uncertainties and cause some worry, but you can rest easier knowing you’re prepared and equipped with the necessary tools to take on whatever comes your way.

For step by step instructions on how to use each type of emergency glucagon, click here.