I love being active in the diabetes online community. Not only do I get great advice, and have made some great friends, I get to pay it forward and help all those newly diagnosed just like the people in our community helped me. I immediately stopped scrolling through my feed when I saw this adorable dog, who much to my dismay, had just been diagnosed with type one diabetes.

Biscuit the Cavalier already is quite an Instagram sensation, with a huge following, and has traveled to more parts of the world than I could only dream of visiting. Biscuit will continue his amazing journey thanks to her amazing family and just like us, will continue to thrive despite her new diagnosis.

I asked his mom Candance some questions about pre-diagnosis and how they are acclimating to their new normal. 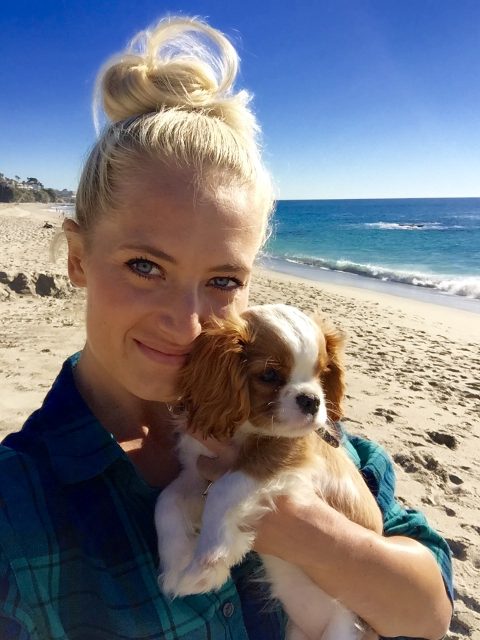 With over 45,000 followers, your adorable dog, Biscuit, has quite the following! How did Biscuit gain such a following?

We consider every one of them friends! Many of them we’ve met in person in California, Chicago, and London. I think the followers came in two ways. In the beginning with Biscuit’s puppy videos, she was absolutely hilarious. The second way we gain and keep followers is by being real friends with them. We are honest about Biscuit’s health and struggles as well as the adorable stuff. We try to contribute back to the community because we realize it’s a genuine source of joy and support for so many people, including us.

I see you are such a great mom to Biscuit and she is one blessed pup! What are some of the things and places you’ve done together? What is one of your favorite mommy and me moments?

Oh my, there are so many good memories! Some of my most treasured are the simple ones, like our runs on the Back Bay trail when we lived in Newport Beach, and beach days when Biscuit was a puppy. We’ve done a ton of UK travel together; she’s been to the Cotswolds, Beachy Head, the Jurassic Coast, and Hampshire with us. Some friends took her to Snowdonia one year! A few of the most memorable moments are when I took Riley and Biscuit, just the three of us to Cornwall in the summer. I also think some of our Cavaliers of London meetups have been the most magical for us in London’s parks. The double-decker bus tour last year was epic and we hope to do it again soon. 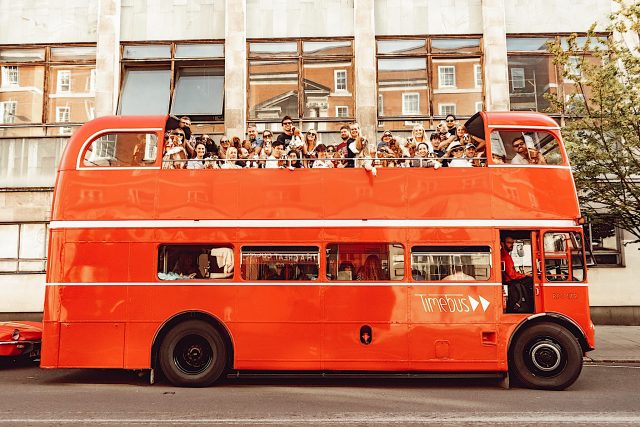 At what point did you realize something was wrong with Biscuit? What signs did you notice? I saw on Instagram you were kicking yourself for not noticing sooner. I am pretty sure every parent has experienced this guilt. This is not your fault, I was 37 at diagnosis and it took me weeks, if not months, to realize! What signs would you tell other dog owners to look for?

Don’t we just wish they could speak to us? I know Biscuit communicates with me in some ways, and what I regret not tuning into was Biscuit’s need to be comforted in the weeks leading up to the worst symptoms. She started laying on my lap at every chance, which is unlike her because her heart condition overheats her easily and she’s never been a cuddler.

In the beginning, the symptoms were things an experienced dog owner wouldn’t think to seek help for. Drinking more, peeing more, more sleep. She started been drinking exponentially more than usual on the day I finally decided to take her to the vet. On the “last straw” day, she was drinking a bowl every couple of hours and needing to wee way too often. She’d also become wee incontinent on the last one or two days, unusual for a trained six-year-old. Her energy was low, but not alarmingly.

The big “tell” was that she lost weight rapidly, that is what most alarmed me. The other big “tell” is that these symptoms came on fast. We noticed the drinking and weight loss on the weekend and by Tuesday we were having our first blood tests. 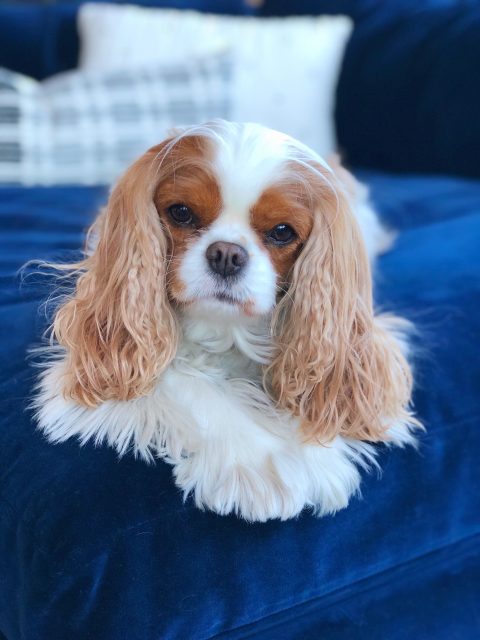 What was the first step you took when you realized Biscuit needed medical attention? Are veterinarians equipped to handle the needs of dogs with diabetes?

I’m sure most cavalier owners, being as attentive as we are, are quite picky about patronizing experienced vets. Experienced general vets know diabetes well enough to treat it by monitoring dosages of medications. Ours is a former combat/military vet and we trust him completely.

I called to ask if they would need some sort of urine sample since that seemed to be central to the problem. I now always ask if they need poo or wee before I go. At that point we went in, they tested the urine and glucose came back in Bisc’s urine. My vet told me later that at that point he was 90% sure on diabetes, but professionally wanted to confirm with a blood test. We actually also took a follow up blood test after a week of strict nutrition to rule out other glucose related disorders and dietary conditions.

Taking on the daily management of diabetes can be overwhelming and exhausting. How did both you and Biscuit handle the transition?

It’s hard, but in making her meds a habit, we’ll get to the point where it becomes less emotional. In the beginning, my husband and I were both trying to administer her two daily injections, but in my opinion, it’s much easier if it is the primary task of a singular person in the household. No mixups, less timing issues. Biscuit doesn’t know anything is different, except that she is still adjusting to needing to wee more. We’re having accidents. It’s hard, but she’s doing her best and we’re trying to be patient! Her energy (and begging) came right back with her starting on insulin, so we’re trying not to favor or spoil her too much!

Being diagnosed only 7 years ago with type 1 myself, I know getting used to needles was hard for me. How does Biscuit handle the injections? What advice can you offer to other dog owners on how to do this as painlessly as possible?

The injection pen we bought is so seamlessly easy! She braces herself for the injection every time, but I sense that my pinch of her skin to find a fold to inject is worse for her than the needle entering. After the first time, we toughened up and it’s now very routine. 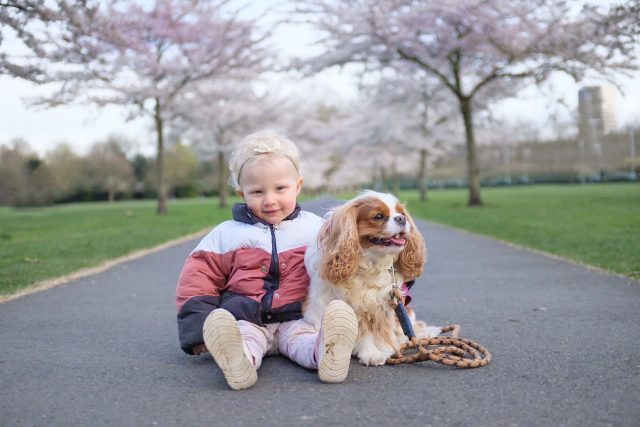 Living with diabetes is a financial burden to us all. How is it with animals, any different? Does Biscuit have insurance? Is it making it financially easier for you? What can you tell other caregivers about dogs and the cost of living with diabetes?

The financial burden is probably the biggest concern for us. We were prepared to deal with an aging dog, but with heart issues and the expensive scans, the insulin costs will add up. We don’t have insurance, it’s a regret of mine, but we’re too late now. My advice is to go to online purchasing as quickly as you can with being respectful to your vet for having diagnosed and cared for your pet so well. In our case, we will buy our supplies from the vet for a couple of months and then move to an online drug supplier.

How was Biscuit’s diet leading up to the diagnosis? What changes have you made and how is Biscuit acclimating to the changes?

We are finishing our food and then will move to diabetic dry food. Treats are simplified – cucumber, dried liver, simple ingredients!

How soon after the diagnosis and being on insulin did Biscuit start to feel better?

Within a day! So fast.

What advice would you give other caregivers of pets living with type one diabetes?

Be of good cheer, there is so much excellent information and support available to you if you look for it. Be grateful to have a diagnosis even though it’s tempting to feel fatalistic. It’s the first step to recovery and it’s not a death sentence. 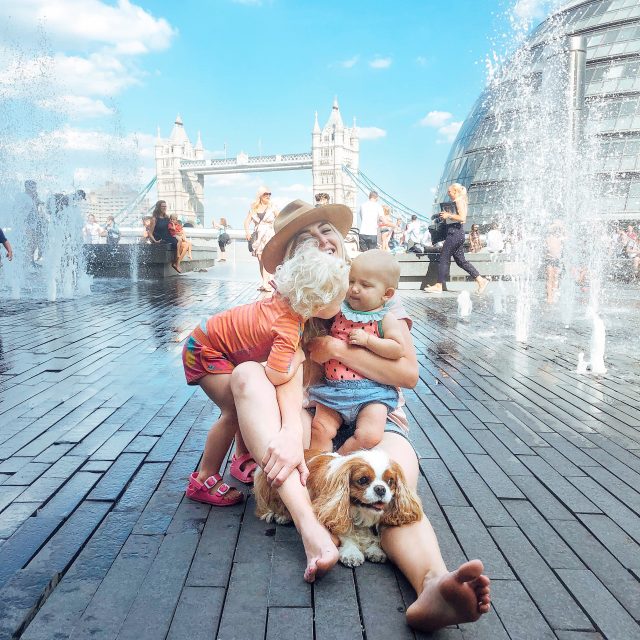 I see you have two adorable little girls. How have they acclimated to the changes? Do they like to help with the daily tasks? How did you explain the disease to your children?

They don’t notice yet, but I’m sure they’ll start asking questions! I’ll get back to you on this one. The one big adjustment for them is that they can no longer feed her any of their food, we have to be very careful! (Which probably tells you how much sugar is in their snacks.) One thing at a time!

Being diagnosed with type 1 diabetes isn’t easy, nor is becoming an overnight caregiver. And no different than when a child is diagnosed, it’s a job you never saw coming but you love your pet more than anything and will rise to the occasion to give them the best life possible!

Thank you so much for taking the time to answer my questions, Candace! We wish both you and Biscuit health and happiness and we look forward to continuing to follow your journey! Thank you for the opportunity to tell our story! We’re so excited to become part of this wonderful Type 1 community and help where we can!