Adding vegetables to your soup is one of the great ways to achieve your daily vegetable requirement of 1 to 3 cups. It just doesn’t give your body the vitamins and minerals it needs; it also makes the soup tastier for your palate. Here are some easy recipes from nutritionists and low-carb bloggers that will encourage you to sip (or slurp) more soup from your bowl: 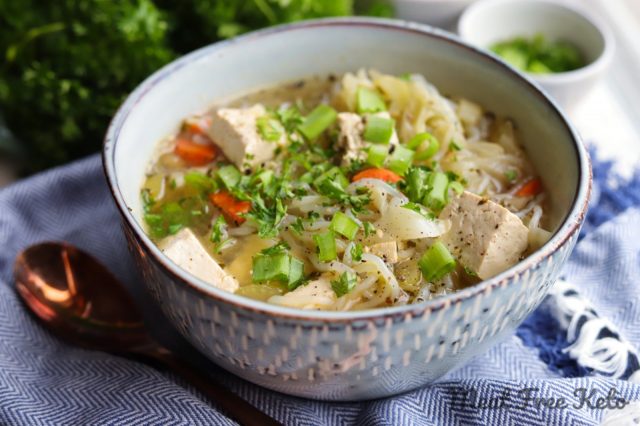 Just put all the ingredients of this recipe in a pressure cooker for five minutes, and you have a soup that’s both delicious and filling. It is so quick and simple to prepare that Liz MacDowell at Meat Free Keto considers this as her go-to food when she’s under the weather. It is also adaptable, so you can substitute the vegetables with anything you have in your fridge. It contains only 5.6 g net carbs, a good number to number to deal with, especially when you’re sick, and you’re doubling your effort to manage your blood sugar. 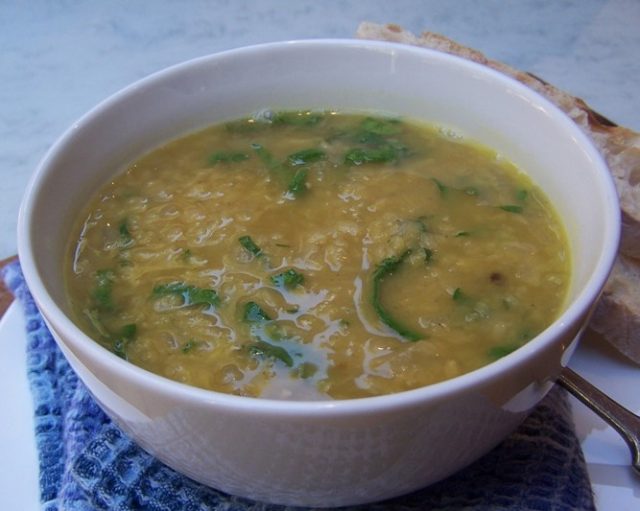 Lentils are rich in protein, fiber, and other nutrients — and quite affordable, too! Now, if you add the superfood spinach to any lentil dish, like this soup, you’re giving your body a grand treat. While you need about 40 minutes to prepare this recipe from Catherine Saxelby of Food Watch, it includes 20 minutes of simmering time. Use that time to make other dishes for your meal, do some kitchen chores, or check your diabetes supplies. 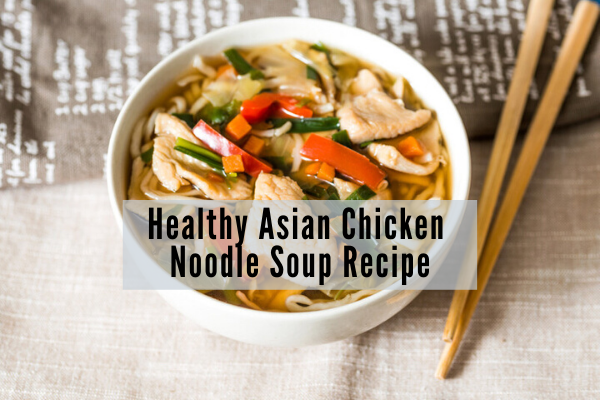 Got some leftover grilled chicken? Use it for this vegetable soup along with mushroom, broccoli, colorful bell pepper, and other seasonings. This meal-in-one recipe has everything you need to get through to the next meal, but if the carbs are causing a sugar spike, we recommend replacing the wheat-flour noodles with shirataki noodles or with more vegetables. Andrea Holwegner at Health Stand says this is super easy to prepare and even provides a make-ahead method for people on the go. 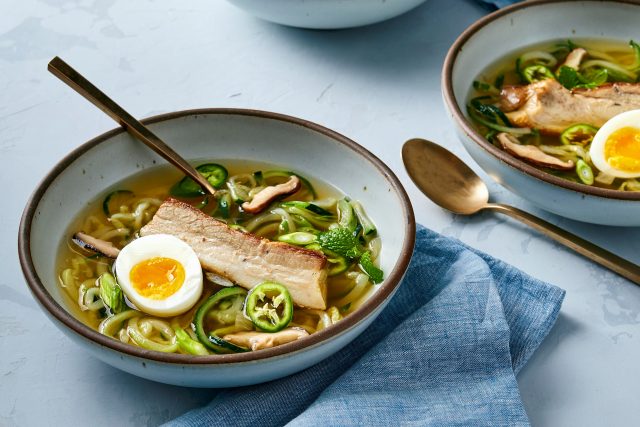 If you’re looking for another veggie-packed soup, here’s another one from Jen Fisch at Keto in the City. Instead of traditional noodles, she uses zucchini or summer squash noodles for this recipe. The soft-cooked egg, along with your toppings of choice, adds more flavor to the soup. Make it Pho-tasting with chopped fresh mint, jalapeño, cilantro, and lime. Craving for a traditional ramen taste? Add bean sprouts, dried seaweed strips, and corn. 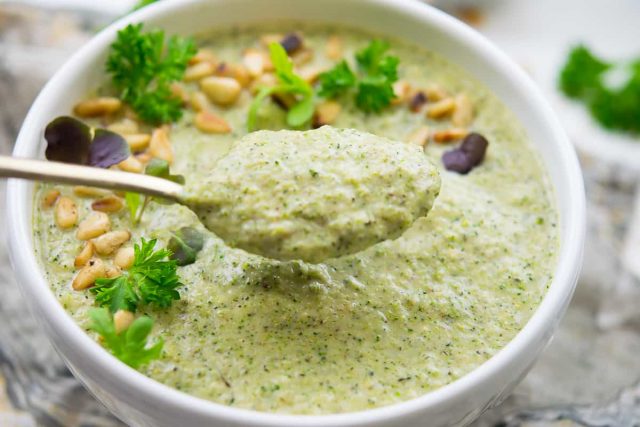 Blend roasted broccoli and garlic with warm broth, coconut milk, and seasonings, and you’re up for some delicious soup. At 7.9 g net carbs, this recipe’s roasty flavor makes your meal more appealing, and preparing it in a blender means you can customize the texture (blend longer to make it smoother for the picky eaters). Cristina Maria Curp at The Castaway Kitchen recommends garnishing it with roasted pine nuts and/or any preferred herbs or microgreens for an additional health boost.

What soup recipes do you love to prepare for the entire family? Share them in the comments.

Four delicious, low-carb soups that are well-seasoned and warming

Is there anything more comforting than a bowl of soup on a dark winter’s evening? (Besides, like, a round-trip ticket to Barbados.) When I serve soup to my loved ones, the windows dark and the candles lit, I feel like I’m more or less ladling out my devotion. And despite the obviously extreme ease of preparing canned soup—Open the can!—homemade soup is relatively quick and straightforward, and offers a lot of bang for your buck, both effort-wise and money-wise. You can make a lot of soup for a little money, it’s very adaptable to particular tastes, and it’s a wonderful excuse to use up any vegetables that may have lingered a little haggardly in your vegetable drawer. Cook them into a giant potful, garnish the bowls appealingly, and watch those sprouting onions and tragic celery revive and shine.

In other good news, soup has the great potential to be very low in carbohydrates: the broth itself is practically carb-free, and you can add lots of low-carb veggies and meat, and then stuff it full of other low-carb deliciousness, in the form of cream and cheese and avocadoes and seasonings of all kinds. Serve it with a salad to make a classically balanced meal, and, if you crave crunch, add some low-carb seedy crackers (I’m in love with Trader Joe’s Gluten-Free Norwegian Crispbread) or some crunchy 100% cheese crisps (Just the Cheese is our favorite, but Moon Cheese is also very good).

One note about soup-making: please do make a habit of tasting soup before you serve it. It should be perfectly delicious, and if it’s not, you can absolutely remedy the situation. Nine times out of ten, what it needs is more salt. Add some, taste, and then add still more if you need to. The other 10% of the time, we’re likely looking at a brightening squeeze of lemon or lime, a grinding of black pepper, a drizzle of cream, or some other relevant addition that will tip the scale from blah to beautiful. You’ll serve a wonderful dinner, and if you play your cards right, you’ll have a warming thermosful of leftovers for the next day’s lunch. 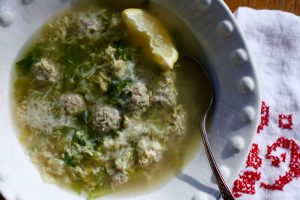 I have always assumed that one day I would (finally) attend an Italian wedding, where I would be served this fragrantly delicious meatball-studded, egg-threaded soup. I recently learned, however, that the name actually refers not to human nuptials, but to the delightful marriage of meat and greens. A little disappointing, sure, but still a wedding you’ll be happy to attend. Let me just mention a couple of things: escarole looks like a kind of raggedy head of lettuce, and if you can find it, do use it; it’s simultaneously bitter and, when simmered in broth, lusciously sweet, and it has these lovely meaty stems, which add tons of substance to the soup. (That said, it’s totally fine to use other greens.) Also: while the lemon is not traditional, I love the vibrant punch it adds here, and I also love to add enough black pepper—to both the meatballs and the soup itself—that it all ends up a little bit spicy. 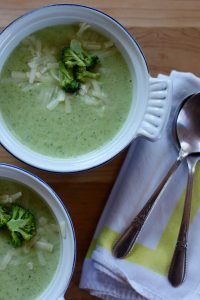 This is my daughter’s favorite soup by a landslide, maybe because the combination of broccoli and cheese makes it less like soup and more like a decadent casserole that’s been. . . liquefied. Don’t be alarmed that there’s no potato or flour to thicken it; it’s plenty thick thanks to the great abundance of broccoli and cheese. But do puree it pretty well, because otherwise it will have a slight tendency to separate into its liquid and solid components (although this is nothing that a little bit of stirring won’t remedy). If you forget to hold back a bit of broccoli and cheese to make it pretty when you serve it, you can garnish the soup with the fact that it is perfectly delicious just the way it is. 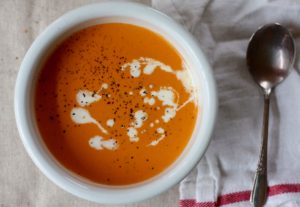 Tomato soup is a comforting classic for a reason: it’s pretty and creamy; it’s tangy and rich; and you know you’re going to like it before you even take that first bite. Plus, this soup takes very kindly to variation. Two favorites of mine: adding a sliced-up head of fennel when I’m sautéing the other vegetables, and/or adding something smoky, such as chipotle puree or smoked paprika. And would a little grated cheddar hurt any? I happen to know it would not. 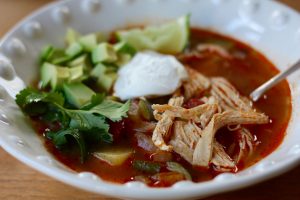 If this fantastic, spicy soup had tortillas in it, I would probably call it Tortilla Soup; if it had hominy, I might call it Chicken Posole. Instead we are keeping out the high-carb ingredients, but packing the soup with plenty of smoky broth and shredded chicken, along with delicious extras like avocado and sour cream. This is the kind of meal where it’s actually nice to let folks garnish their own bowls: put out little bowls of the avocado, sour cream, cilantro, and lime wedges (feel free to add more extras, such as chopped onions, shredded cheese, and toasted pepitas), and everyone can help themselves.

Catherine loves to write about food and feeding people. In addition to her recipe and parenting blog Ben & Birdy (which has about 15,000 weekly readers), she edits the ChopChop series of mission-driven cooking magazines. This kids’ cooking magazine won the James Beard Publication of the Year award in 2013 – the first non-profit ever to win it – and a Parents’ Choice Gold Award. She also helped develop Sprout, a WIC version of the magazine for families enrolled in the Special Supplemental Nutrition Program for Women, Infants, and Children (WIC), as well as Seasoned, their senior version. They distribute over a million magazines annually, through paid subscriptions, doctor’s offices, schools, and hospitals. Their mission started with obesity as its explicit focus – and has shifted, over the years, to a more holistic one, with health, happiness, and real food at its core. That’s the same vibe Catherine brings to the diaTribe column.

This is one of those recipes that is pretty difficult to screw up. There’s a lot of room for changing up the seasonings to suit as well.

I’ve never actually made cabbage rolls before, but I’ve watched my mother-in-law make them in the past. It seems like a lot of work if it’s just a dish you are making for an everyday low-carb meal.

Don’t expect things to hold together well in this unstuffed cabbage roll bake. Unlike the filling of regular cabbage rolls, the Miracle Rice isn’t sticky enough to bind the ingredients together.

I found this to be a comforting meal, particularly on cool rainy weather.

I hope you give this one a try. It would make a nice dish for potluck get-togethers. And, you could slow cook it in a crock pot and keep it warm during the party if you have access to a power outlet. 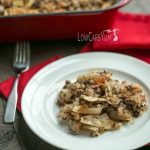 Try this low-carb unstuffed cabbage roll bake when you don’t have time to make individual cabbage rolls. A great meal to share with family and friends! 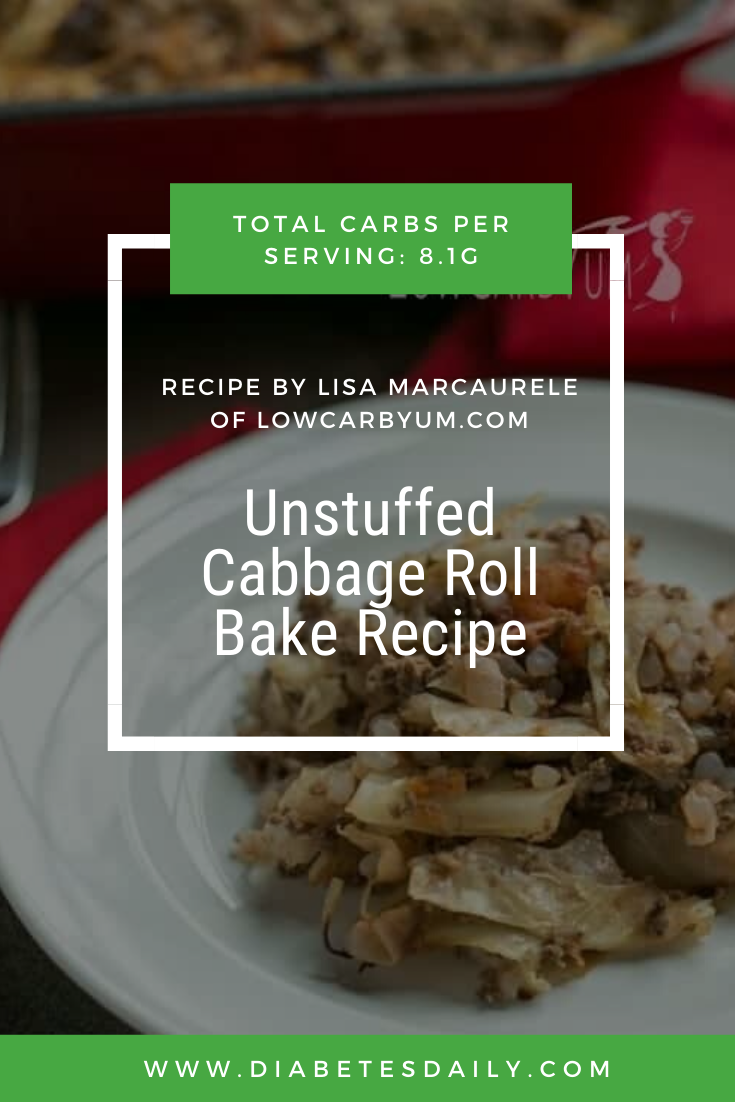